FrameMaker is functionwise a hybrid of Word /InDesign and a SGML/XML editor. It’s a superstrong tool designed to handle complex and long (like in VERY long) documents in a structured and controlled fashion.
FrameMaker is sold as a standalone app as well as a component of Adobe Technical Communication Suite.

Thing is.. we are experiencing a massive convergence of technologies these years. Unicode helps us put all languages on the same standard, enabling us to display them in a consistent manner. XML/DITA helps us mark up content in an “intelligent and structured manner”. Publishing from a binary format into an open format like HTML opens up our content to searches from the entire world. HTML5 allows us to display content on all platforms...and Google ultimately enables these searches and advises on how to structure and markup content making it easier for the search engine to display search results.

Where is Adobe FrameMaker in that scenario?

FrameMaker comes with a dual interface allowing it to work both as an unstructured stylebased dtp program, but also as a structured XML DITA editor. Originally FrameMaker was sold in two version - an unstructured version and an SGML version, but SGML is a “monster” to work with and few companies had the skills and ressources to fully invest in SGML. Thus Adobe decided to make the two separate products into one product with a Preference button separating the two interfaces. This options comes with a very advantage, because it allows the users to work their way into structured publishing without having to abandon all their existing material. You can open unstructured documents in structured mode, and just keep on working.

The overall intention of the development process seems to be focused on making FrameMaker the markets best XML/DITA editor. FrameMaker has unmatched ability to render that content and publish it into all sorts of deliverables. The major part of the updates goes to the DITA capabilities, like a new Tree/structure view, LightWeight DITA support, Rich Media Support for DITA etc, but other updates targets process oriented features, like better PDF generation and a document splitter.

This version also is the first FrameMaker version to be bought as subscription only. FrameMakers very conservative user base have balked at the notion of subscription based software, but now it is over. Adobe FrameMaker is subscription software like InDesign and all the other Creative tools.

Finally proper smart quotes working across all languages! This may seem like a small thing, but working in other languages than english, not being able to use the proper quotes of your native language is hugely annoying. Implenting this is no small feat, actually. Takes a lot of linguistic skills.

When you work with big project with a vast amount of chapters and languages, translation is a “big thing”. Managing translations takes time - a lot of time. Shipping and controlling translations can be a pain. Adobe has begun getting to grips with that task, by creating
an option ot package a document to XLIFF.
XLIFF (XML Localization Interchange File Format) is an XML-based format created to standardize the way localizable data are passed between tools during a localization process. It is a format used in most CAT tools (Computer Assisted Translation). Being a “middle format” it holds no display properties in itself, but is merel a container to store translatable content separated from non translatable content. Being able to package and send your document as XLIFF sets you, as a customer free from choosing which translation tool you want to work with. And ultimately makes it easer to change translation agency.

Export to XLIFF is a great bonus to FrameMaker.

FrameMaker has had a “Review” feature, since version 2019, but now this feature which was modestly hidden under “File”, has moved to prominence in the main menu. This is a good thing and “Review” is a nice feature which will allow the user to send documents for review to other authors or stakeholders for commenting. Comments, applied online, or on the desktop can be imported a completed in FrameMaker. Documents may be sent as single pdf’s or sent using Adobes Cloud service, Adobe Acrobat Cloud. It works quite neatly and will become a much used service, I believe. I only wish it was possible to have a list of contacts in the cloud service. 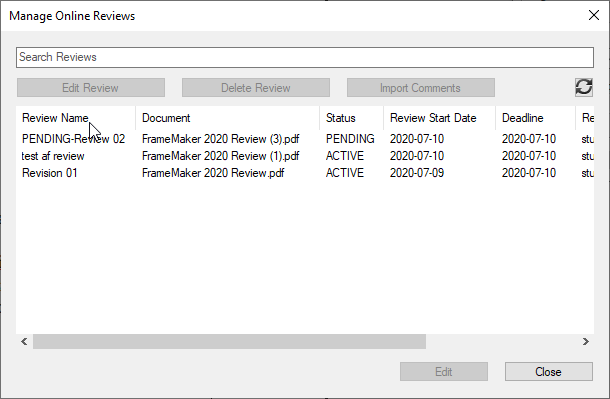 A new feature is the “Document Splitter” The document Splitter is basically a script which will split a doument into smaller segments - so called topics. Why would I want to do that,  you may argue? The answer is a bit longwinded, because the reason to want that, is mostly about transitioning your documents into DITA, where you will work with topics based authoring. It’s a neat feature, and it works, but one has to have a deeper knowledge about how FrameMaker publishing works in order to really appreciate it, because it also depends on making markup in your documents prior to running the script.

Citating the words of Adobe themselves “Adobe Experience Manager (AEM), is a comprehensive content management solution for building websites, mobile apps and forms. And it makes it easy to manage your marketing content and assets. Build lifetime value - deliver digital experiences over the lifetime of your customer that build brand loyalty and drive demand.”
Adobe FrameMaker can be integrated as a frontend to Adobe Experience Manager, where AEM is used as the publishing engine to the FrameMaker derived content. AEM is a big product and an expensive one as well, but it does also offer a huge amount of options.

Adobe RoboHelp is a gamechanger, when it comes to "Help Authoring Tools". Being a new piece of software and written entirely from scratch, it is fast, innovative and full of bright ideas. And it can open Adobe FrameMaker files! This makes porting  your FrameMaker authored content much easier and much more open for styling and handling. I won't go into details with Adobe RoboHelp 2020 here, but save that for a separate review, but it is great!

The not so Good

FrameMakers user interface is a bit dated and some of the changes which came with version 2017 has taken a wrong direction. Version 2017 introduced an “Insert Menu”, which is basically a list of shortcuts to functions which can be found in their own “Panels”. But stocking almost every feature in the Insert Menu, seems like a confusing idea. An example: having an open document and clicking “Insert Standalone Table of Content” will give you this dialogue.

So you CAN insert a standalone Table of Content - only, no - you can't really. Well... not like this. In another fashion.... Would you like to make a book? ... This is superfluos and looks like Microsoft in the bad old days.

This kind of lack of design stringency also applies to very basic features, like the "Object Style Designer", which works as a dialogue and not a panel like the rest of the “designers” or the “Anchored Frame panel” which should have figured under View -> Panels, but has to be found under “Insert”.

Some of its core facilities, like rendering graphics, creating graphics and handling colors, are also getting a bit out of touch with todays demands. At least if you consider FrameMaker a desktop publishing tool, but then again, FrameMaker is a lot more than that. So while there are caveats, the features do work!

Final Verdict - should you upgrade?...

Yes - you should upgrade to FrameMaker 2020! Adobe FrameMaker 2020 has taken a very long and solid step in the right direction, while keeping its “soull”.

The main forte of Adobe FrameMaker is its speed! It can handle thousand of pages with lightening speed. Manage and update cross references, numberings, indexes and footnotes without breaking a sweat, and it is robust, transparant and reliable.

And Adobe is committed to modernizing and updating this beast from times before time, making it possible for large companies who rely heavily on documentation to stay with the Adobe platform and still evolve into structured publishing.